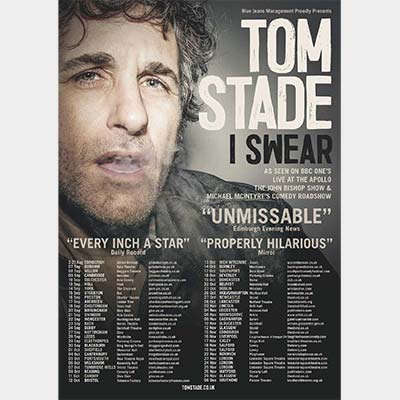 After a hiatus from the touring scene, get ready for another epic blast of Tom Stade!  The Canadian tour-de-force is back with a brand-new show for 2017.

Renowned for his carefree attitude and broad-minded vision, nothing is taboo to this enlightened and captivating comedy legend.  Combining off-the-scale charm, razor-sharp wit and a no-holds-barred attitude; Tom pledges to tell the truth, the whole truth and nothing but the truth.

Kick back and enter the awesome and mischievous world of Tom Stade as he provides an inspiring and incisive antidote to these dark and uncertain times.  Simply sublime comedy…I SWEAR.

The tour kicks off in Tom’s home town of Edinburgh in August with a residency at the Gilded Balloon Debating Hall for the entire run of the Edinburgh Festival.  Tom will then travel the length and breadth of the country taking in over 50 dates across the UK during the autumn. Click HERE for dates and venues.